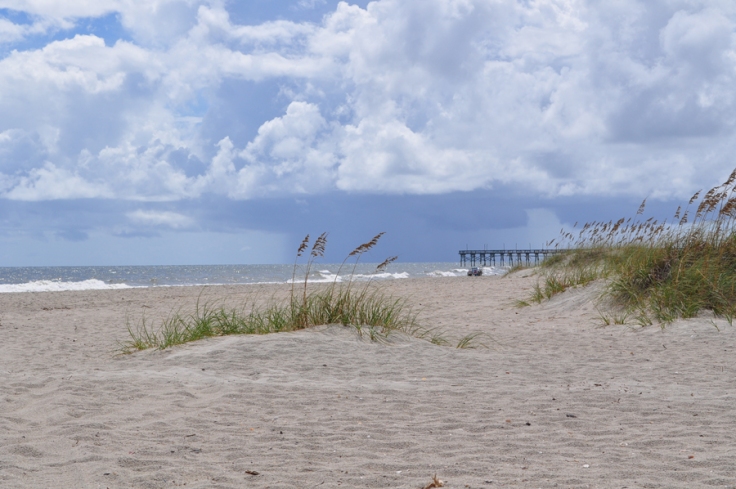 If it’s the beaches.

If it’s the beaches’ sands you want
Then you will have them.

If it’s the mountains’ bending rivers
Then you will have them.

If it’s the wish to run away
Then I will grant it.

Take whatever you think of
While I go gas up the truck
Pack the old love letters up
We will read them when we forget why we left here.

From The Beaches, by Scott and Seth Avett

If you stop by from time to time you know about Larry Ellis, prolific poet and award-winning novelist.  Today (Thursday, February 25) at 1:00 ET, he’s going to be a guest on Frankie Picasso’s internet radio show on the TogiNet Radio Network. He’ll be talking about his latest novel, Overtime, A Basketball Parable.  You can listen live here.  If you happen to miss it, it will be up later as a podcast.

The River of Life 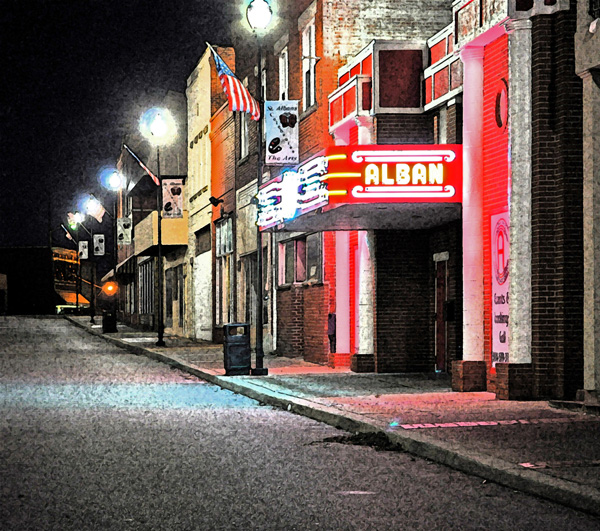 After a few minutes the buzz in his ears had subsided and he began to hear the sounds of the city, the noise of the streets. The taxis revving, the heavy groan of diesel engines moving trucks and buses. From a distance, a siren sang into the night. A horn blared next to him. He turned to look and a cab driver shook his fist and yelled something in an unknown tongue to another cabbie.

He walked on. The rubber soles of his hiking boots made no sound on the concrete. There were other people, but the sidewalk was far from crowded. He walked straightway but there was never a moment when he had to sidestep to avoid an encounter with someone else. They seemed to employ a kind of urban sonar that initiated almost imperceptible course adjustments as they moved toward their destination. No one spoke as they passed. No smiles. No eye contact. It was as if the city, for all its celebration of life and culture, shunned the random discovery of another individual.

Though the stores were closed, restaurants and watering holes teased with a hint of celebration and inclusiveness. But he knew that people like him, those who by either natural tendencies or situations that had been forced upon them, were more comfortable sitting to the side and observing. People like him, were they to expose themselves to the illusion of grand party, would again learn the hurtful truth that no one really cared.

No one really cared.

The night was cooling. He zipped up his jacket.

He had been walking for more than an hour but it wasn’t the time that he noticed. It was the quiet. If the street was the river of life in the city, he had hiked to its headwater. Or maybe a tributary. A slower body of water, more peaceful. When hiking in the forest, he would often find a rock beside the river and let his mind drift with the placid current.

He stopped. Ahead, a small group, men and women, loitered on the stoop of a walk-up. He looked behind. A couple of people walked in the opposite direction. He must have passed them but he couldn’t remember. Across the street, a warm yellow light flooded onto the sidewalk from the neon sign of a pub. Edie’s. No. Eddie’s. One of the ds had lost its glow. Either way.

He was tired. He needed to rest. 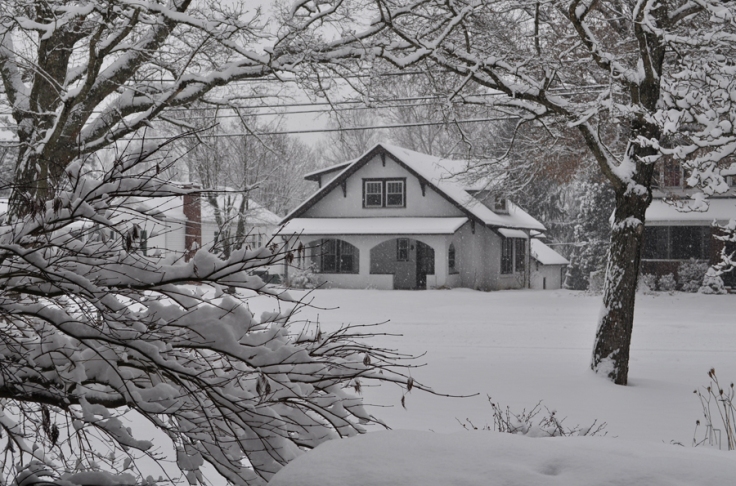 It was another snowy night.

Larry Ellis lives in the same neighborhood I do. The scene last night was much like the photo above.  In the middle of the snow storm, he looked out his window and saw a young woman walking down the street, all alone in her world of white.  He wrote this:

She walks through the snow as if walking through time
The storm had covered all, erasing the present
Yesterday’s litter, this year’s rust, the cracks in the pavement
All gone under white
The streetlights, the porchlights, the moonlight and starlight
All combine tonight
Every line is straight and even, every wall upright
.
And she comes walking through as if from the past
As if from another world: maybe this perfect, soundless world
She walks alone and seems unworried
Unaffected by this that has kept every car in its garage
And has closed the schools and churches
.
Is her coat, so perfectly fitting
From another day?
Does she walk to some grand house
Now long vanished
That has reappeared in the throes of this storm?
That house where yellow light from tall windows
Makes bright rectangles on the snow in the lawn?
Will there be someone at that door to meet her
Someone to take her coat?
Candles and wine on the table
And a fire in the hearth?

The story of Trevor and Sheu-lo had started with a conversation about apples. There had been no flash of physical magnetism, no sparks flew, no glint in the eye, no wry smile, no hint of seduction whatsoever. None of the elements that had made his encounters with Dani so gut-wrenchingly wonderful. Yet as their conversation had moved from Fuji apples to Bob Dylan and Eminem, something happened.

“It’s the Casimir effect,” Sheu-lo had said weeks later after they had finally abandoned the pretense that they were colleagues, nothing more. She had made the comment over dinner in a dimly lit restaurant, where music never played, an irony that Trevor found appealing.

“It’s a scientific principle. Casimir was a physicist who experimented with electromagnetic fields. Everyone knows about positive and negative fields.”

“Right. But Casimir discovered that there is a small attractive force that acts between two uncharged plates.”

At first they had maintained their worlds separately, but they soon overlapped. And though they were spending many evenings together at Trevor’s insistence, they had limited their physical involvement. There were lapses in discipline which played on Trevor’s guilt on different levels. The feelings that he had for Sheu-lo were built on a foundation of respect.

There was no dramatic proposal, no elaborate ceremony.

They were married in Max’s church, attended by their families.

That morning, I drove in the bright sunlight on ribbons of pavement that lay gently on the snow-covered hills against the deep blue sky.

I was by myself.

To sort it all out.

On the edge of Appalachia, the hills disappeared.

Across the Ohio River, the stacks pierced the sky and bellowed white cotton.

One hundred years from now, they won’t be there.

They weren’t there one hundred years ago.

That’s what those kinds of day will do for you.

AT FIFTEEN MINUTES PAST TEN the next morning, the news site flashed a red banner across the top of the screen announcing a plane crash in Texas. He clicked the link and saw that it was a commuter flight from Houston to Dallas. He would not have been shocked if it had been their flight. That’s how life worked, it seemed.

Witnesses reported a giant fireball. He looked at his disfigured left hand and touched the side of his face and felt the scars.  He knew the agony they would have to endure if there were survivors, but that was unlikely.

If you want to know a man, know his pain.

It was one of dozens of quotes he had heard in his freshman literature class at the University of Tennessee, but the only one that stuck with him. For obvious reasons.

At the time, the physical pain he had endured was still fresh and still issuing reminders that his body had been greatly traumatized. During the months of recovery he had put on the brave face and carried a resolute disposition. And then the real pain began. The isolation. The guilt that never quite seemed to leave him.

If you want to know a man, know his pain.

He closed the internet browser.

He was supposed to be compiling demographic data to be used in establishing the housing ratios for the Renaissance project, but his thoughts were elsewhere. Loss. Grief. Dani. His own desolation.

He opened a new document and closed his eyes as he let his emotions speak to him.

He felt the rhythm first. A slow, three-four time. His body swayed slightly, his eyes still closed. Then music. The chords. On the down beat.

He opened his eyes, his fingers on the computer keyboard.

At first, random words: Pain. Loneliness. Her smile. Her eyes.

Then they began to find order.

Bring me back
from the dark of night,

Let me feel
love in your light.

He wished he had his guitar. He wrote a chord progression, not sure if it was really what he wanted. A melody started to form in his head and he wrote to it.

More random thoughts filled the page. He wrote quickly, trying to capture the mood without losing the music. A chorus. More words altered the mood and he heard the change in the tune that would comprise the bridge. There were typos all over the page but he didn’t dare interrupt the flow. More words. The last verse. And the chorus again.

He read from beginning to end. He closed his eyes and let it sink in.

Then again from the beginning, this time singing softly.

Then he scrolled back to the top of the page and wrote: Bring Me Back, by Trevor Larson.

It had taken him twenty-two minutes.

When was the last time you did this?

On my way home this evening, I drove by one of those little roadside parks and saw this kid, a girl maybe 15 or 16, giving it all she had on a swing, oblivious to everything around her.  She was in her own world, and you could tell.

It made me want to go home and do the same.

There’s something about a swing.  You can take it nice and easy, like me in the video, or you can go scary high.  Either way, it just seems to make all the troubles of the day fade away.  Maybe it’s the weightless feeling you get at the apex.  Maybe it’s the centrifugal force that gives you a rush.  Maybe it’s just fun.

I’m an old dude, but I’m here to testifty that swinging is good for any body, any time, any age.

As Al Davis might have said, “Just swing, baby.”