She sat in front of me off to the side, this woman. Her years were twenty-something, maybe thirty, and so she was not yet tainted by the disappointments in life and like all of us at that age, she was the embodiment of optimism and hope. At least that’s the way I read it. But I tend to be overly philosophical and maybe find too much meaning in such things. This is true: she was youthfully and innocently pretty. Not that her appearance has anything to do with what happened. It’s just that I noticed.

And I wouldn’t have noticed had she not turned her head slightly to the right and away from the singer on stage. Something had her attention. My natural reaction was to look in that direction. I didn’t have to turn much, but from my perspective, there was nothing to see. Just more people, listening and watching the young man on stage. None of my business, I thought, and got back into the music.

Still, she stared. Almost unblinking. It was more than a curiosity. She had slipped into a state of para-consciousness, aware of what she was seeing, but unaware that she had become so transfixed. It’s a dangerous place to be. There’s no physical threat of course, but there is a distinct possibility that whoever has created this vortex of cognition will sense that they’re being watched and well, you know what happens. At the very least, it’s awkward, and sometimes threatening. The longer it goes, the more dangerous it gets.

I looked again to my right. Again, I saw nothing unusual.

And then I saw it.

A person. A young girl. Six, seven, maybe eight years old, hair in a pony tail. She was moving slightly to the music, but instead of watching the singer and smiling, as a young girl might do, she was looking down to her left, almost pensive. She was hearing the music, but she was also thinking. About the song? Maybe, though it was just a Christmas carol. About something else? More likely. School work? Family? Who knows.

I looked back to the young woman.

The young girl contemplated, glancing up every now and then, but lost in her thoughts. It was unusual.

Maybe the young woman saw herself in the little girl. Maybe she too, was a thinker, a sensitive soul who had also wrestled with the mysteries at a young age. Maybe she was worried about her.

You know what happened. We all have that sixth sense. Maybe it’s a subconscious observation that’s rooted in the first five senses, but it’s so much easier to claim the sixth sense. That intuition that tells us something’s not right. Or that feeling that someone is watching. The little girl looked over her left shoulder and made eye contact with the young woman.

Hers was a reflex that could have been measured in milliseconds. She immediately turned away, as did the young girl.

I felt bad for both of them. Embarrassed for the young woman and sympathetic for the girl.

But almost as soon as they had turned away, they both, instinctively it seemed, turned to back toward each other. The young woman smiled. The little girl smiled back.

Two smiles that said so much.

I understand. You have a friend.

At least that’s what it seemed to me. But then again, I tend to see too much in such things.

In novel writing, much importance is placed upon the first sentence, the need to capture the imagination of the reader – love at first sight, if you will. Certainly there are many terrific opening lines for great books. (Do you own Google search, just for kicks.) Is this one of them?

It’s the opening of American Pastoral, the Pulitzer Prize-winning novel by Philip Roth.

Ok, let’s not be so literal so as to limit the “opening line” to simply the first sentence. Let’s say we’re evaluating the opening in general. Roth follows the not-so-descriptive introduction of one of his pivotal characters with this:

“During the war years, when I was still a grade school boy, this was a magical name in our Newark neighborhood, even to adults just a generation removed from the city’s old Prince Street ghetto and not yet so flawlessly Americanized as to be bowled over by the prowess of a high school athlete.”

Are you hooked yet?  No?  Me neither.

And yet I kept reading. Page after page after page about the old neighborhood and its people. Not much action. Some conversations in a class reunion about days gone by.  in medias res?  No, not really. It’s all backstory. It’s what writing coaches would call exposition, and they greatly advise against it.

Take another look at that second sentence. It’s really long. The coach would advise to break it up, to get that comprehension level down a couple of notches. Roth also uses big words that most readers would have to look up. Again, not something they say you should do. It takes the reader out of the story.

I used to read a lot of John Grisham. Lots of story and action, and Grisham will keep you turning those pages. He follows the rules, has lots of fans, and piles of money. Roth probably does too, but he’s not exactly a household name.

Yet Philip Roth is a highly respected novelist. He breaks the rules and wins a Pulitzer.  How?

“The daugher who transports him out of the longed-for American pastoral and into everything that is its antithesis and its enemy, into the fury, the violence, and the desperation of the couterpastoral – into the indigenous American berserk.”

It took Roth 85 pages to get to the reader to the point that the meat of the sentence is understood mentally and emotionally, and so on-point that its resonance is profound.

I’m starting to get it.

It’s all about what you’re trying to acccomplish. It’s all about what you want your writing to do, and not so much about how many people read it. The truth is, the odds are greatly against any of us writing a best-seller. If you’re going to put in the hours, it had better be for something worthwhile. It had better bring at least one reader some satifisfaction, that one reader being the author.

Footnote:  The number one best-selling author from 1996 to 2000 was John Grisham. Philip Roth didn’t even crack the top 15 in 1997, the year American Pastoral won the Pulitzer.

Speaking of the Milk Carton Kids, I stumbled upon this little video about a little man in a little town. I can relate.  The chorus:

I’m a little man in a little town
It’s a little cold, I’m a little down
I get a little angry, a little bit each day
A little while longer, we’ll dig a little grave

A poem for Thanksgiving.

The bread is on the table, we gather ’round to share.
We offer thanks for all this food, with this our simple prayer.
We’ll dine in great abundance, much more than we deserve.
We’ll drink our tea and sip our wine; sweet dessert for us is served.
Do we know how much we’re blessed?
Do we really know?
Praise God from whom all blessings flow,
Your love for us to show.

The kids are so rambunctious, the house is full of toys.
They run and laugh and sing and play, and fill our days with joy.
We sit and talk of days now passed, and those who’ve gone before.
Though missed and loved we’ll see them soon, upon that shining shore.
Do we know how much we’re blessed?
Do we really know?
Praise God from whom all blessings flow,
Your love for us to show.

Our time is filled with worries, and struggles through the day.
We wonder how the world will turn, the strife will always weigh.
Should we speak or just stay quiet?  Which battle should we fight?
We know Your way is always true, as darkness fears the light.
Do we know how much we’re blessed?
Yes, I think we know.
You gave Your son to die for sin,
Your love for us to show. 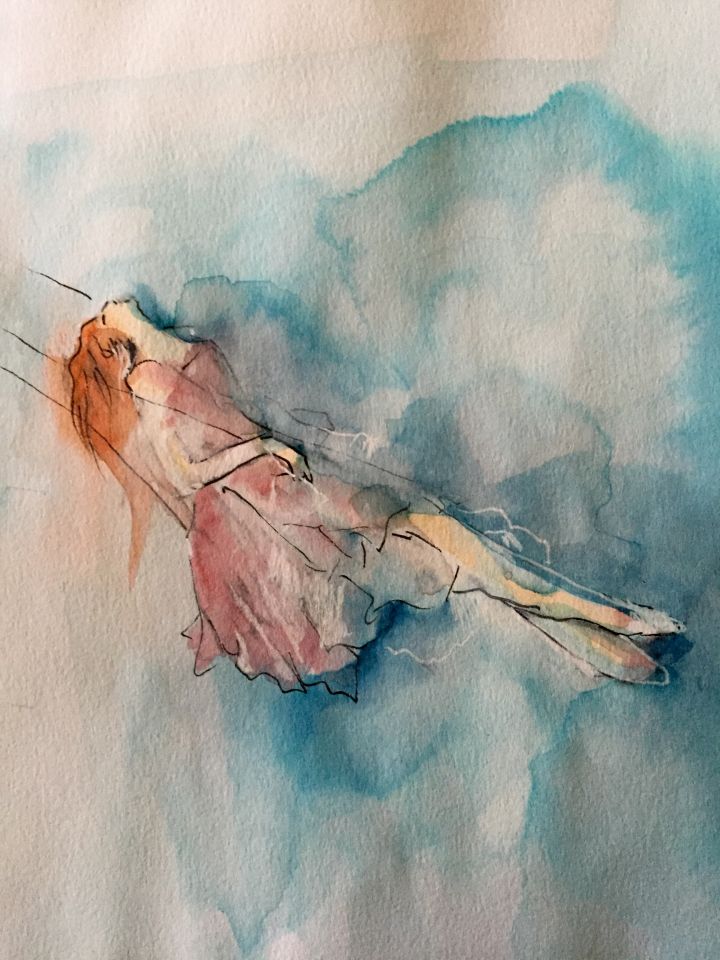 One of my favorite artists, Sharon Lyn Stackpole, just posted this image on her site. It reminded me of a girl on a swing I saw a few months ago as I drove by a little roadside park. She was maybe 15 or 16 and was giving it all she had, oblivious to everything around her. She was in her own world, and you could tell.

It made me want to go home and do the same thing.

There’s something about a swing. You can take it nice and easy, or you can go scary high. Maybe it’s the weightless feeling you get at the apex. Maybe it’s the centrifugal force that gives you a rush. Either way, it just seems to make all the troubles of the day float away.

The door is not finished.

it needs a sweep,

a strip of rubber.

Protests and hatred and intolerance

of the ignorant heartland

I check my work,

hoping my mistakes will be innocuous.

and will be our future.

my time is near.

are living in the shadows.

Have I been reasonable?

Have I been kind?

Have my sins been forgiven?

Dusk is upon us,

will yield to the soft morning light.

sometimes I hear a guitar player like Tommy Emmanuel or Stevie Ray and I think, what’s the use?

i came across this article about Robert Zimmerman’s songwriting. you know, the guy who just won the Nobel Prize for Literature. and i’ve come to the conclusion that i’m no more than a monkey at a keyboard.

cool stuff in the article, if you’re into great writing and poetry, anyway.