Drama on the road. 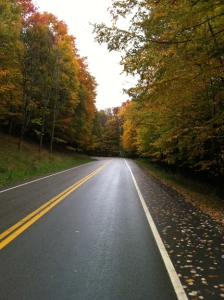 On the Morning Ride

This is a passage from Chris Offutt’s book, The Good Brother.  In this scene, Virgil is about to leave the only town he has ever known.  He becomes aware of things he had never consciously noticed before.

He strolled the familiar sidewalk of Main Street, passing people whose faces he recognized – as Boyd put it, men he’d howdied but never shook.  Teenage boys outside the pool hall stood very close to each other.  As they got older, they would move further apart.  Old men in front of the courthouse owned a segment of space that surrounded them like a web.

And here, he visits his sister one last time.

He drove to his sister’s house at the head of Bobcat Hollow.  The dirt road crossed the creek several times, and in spring the two mixed freely.  At the top of the ridge, trees glowed with autumn colors, but near the creek, the leaves were still green.  Two dogs loped around the house and barked. A young billy goat with one horn stared at him, the only penned animal on the place.

It’s the understated writing; the deft observations; the cultural roots.

You ever get ill at ease, said Rawlins.

I don’t know. About anything.

Sometimes. If you’re someplace you aint supposed to be to be I guess you’d be ill at ease. Should be anyways.

Well suppose you were ill at ease and didn’t know why. Would that mean that you might be someplace you wasnt supposed to be and didnt know it?

What the hell’s wrong with you?

from All the Pretty Horses, by Cormac McCarthy

SOMETIMES WINTER IS SNEAKY and rides in quietly on the coattails of fall, cooling the evenings ever so slightly until one morning, there’s snow hiding between blades of grass. But on this particular Saturday, the Saturday before Thanksgiving, the wind blew hard and cold from the west, declaring an end to the mythos of the endless summer, and languid, hopeful nights.