This, my friends, is Tucker Boulder Park in Davis, West Virginia. It’s a modest little park. Just a bunch of rocks, you might say.  The smaller boulders are natural stones found in the area. The larger ones within the rubber mulched area are manufactured climbing boulders made by a company called Entre Prises in Oregon. Their purpose is to provide recreational opportunities for people in the area.

Now if you know the Canaan Valley area of West Virginia at all, you know there a lots of places for serious climbers to climb real rocks. Seneca Rocks, for example, is about an hour away.

So you might think Tucker Boulder Park is just a little playground. Well, it is, sort of. I was there a couple of weeks ago and there were several serious climbers attempting to climb the large boulder. I asked why they were there and not on a real rock.

“It’s a playground for climbers,” one of them told me. “And it’s a good way to get a workout and practice climbing.”

How good a workout?  Here’s some perspective.  The smaller boulder is eight feet tall. The larger boulder is twelve feet, which doesn’t sound that bad. The different colored knobby things on the boulders are handholds.  They can be moved and adjusted, creating different routes.

For example, if you follow the pink handholds, you’re on an easy route. The pink ones are easy to grip and stand on, and the route up is pretty much vertical. 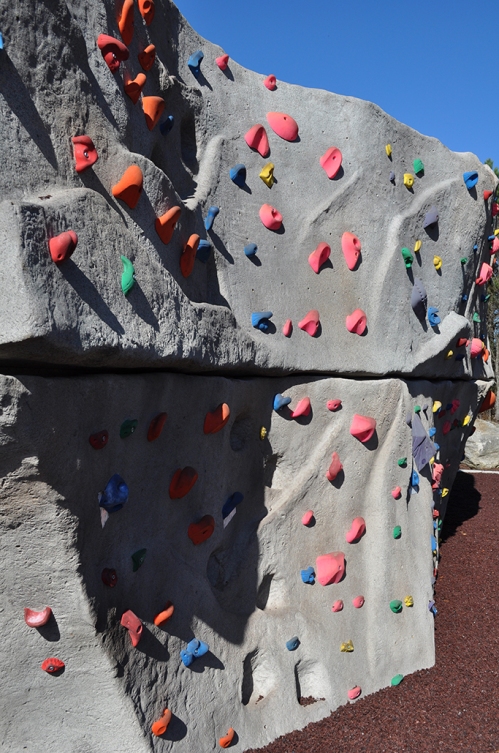 Then there are routes that are not so easy.  Like this: 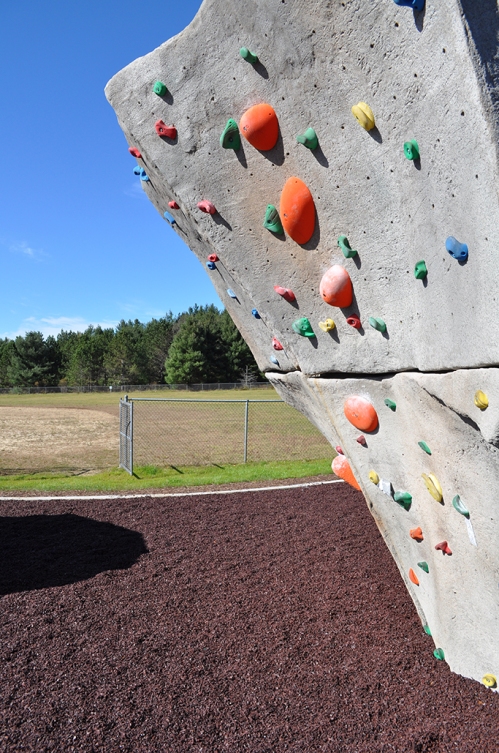 Notice that the wall is no longer vertical. To even attempt this takes tremendous upper body strength.

I was at the park yesterday and spent about an hour climbing.

Then I thought I’d try to circumnavigate the small boulder. It took me a couple of tries but I was able to do it. That’s when my arms and legs started feeling it, which surprised me because I work hard to stay in shape. At the end of my second trip around I was sweating and breathing hard.

I tried the same thing on the large boulder. On the vertical stretches, I was fine, but as the boulder leaned out over my head, I was useless. I managed to climb a little bit, but I fell several times. Thank goodness for the rubber mulch. And when I finished, I was pretty well whipped.

I have some friends who do real climbing. I already had great respect for those who have the nerve to climb up the side of a cliff without manufactured handholds. There’s no way I’m going to try that. Now I have even more respect, knowing the physical effort the sport requires. I left with raw fingers and scraped knees.

And I can’t wait to do it again.