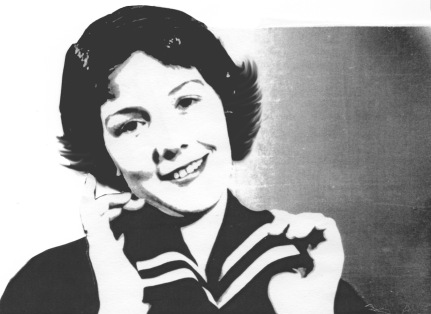 This hip chick is my mother.

The photo was taken around the time she began her career as a stay-at-home mom.

If my father was a left-brain analytical, my mother personified the right-brain free spirit.

My mother had artistic ambitions. She was good with sketches, and I think I remember her working with pastels. But she was raising a family and it was hard to stick with it.

She was also a musician. She played the clarinet in the high school band (or faked it, as she would say, a skill I managed to master when I was in the band), and she was an excellent piano player. But she was raising a family and it was hard to stick with it.

She loved to write and was a master of the funny story. She wanted to be the next Erma Bombeck (a popular humorist of her day) and probably had the skills to pull it off. But she was raising a family and it was hard to stick with it.

Did I mention poetry? No, not the soul-searching free verse that is popular today, but poems that actually rhymed. And again, many were humorous. But she was raising a family it was hard to stick with it.

She also sewed and made clothes for the family. I consider sewing an art form, but for my mother, it was a necessary skill, one that she was able to stick with, because she was raising a family.

Like most right-brain thinkers, my mother had dreams of making it big, but they never panned out. Even so, at every stage of her life she was able to find contentment in the work that she did. Yes, she found happiness in her art, her music, her writing, her poetry. But she knew what was really important. It wasn’t a sacrifice for her to let her dreams take a back seat, it was her act of love for her family. She wouldn’t have it any other way.

Times have changed. With more options available, many mothers are able to work outside the home, fulfill their obligations as a mother, and still find time to pursue other interests. Roles are changing, too. Stay-at-home dads are much more common and give women even more choices.

But my mother’s world was different. Still, one truth remains.

Our time is short and our work is ephemeral.

Know what really matters and make the most of it.